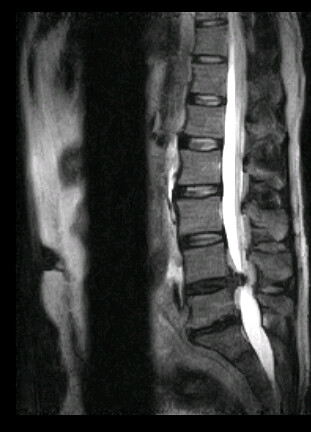 one of these vertibra is not like the others., originally uploaded by POOLEworks | roger.

From an MRI done this morning.

Spent a horrible thanksgiving mostly on my back, ending up in the emergency room with a dilaudid and valum iv.

Several weeks ago, I tried to pick up George to take him up the stairs for bed. As much as I do it the correct way. Squat down, have him pop up on my knee, something happened that day and I slipped a fell forward. Not wanting to drop him, I lunged forward and managed to really hurt myself.

Within a week I’d seen my chiropractor, family doctor and had had a CAT scan. A week after that I had 2 epidural injections in my back. Right on the spot.

I was fine for 3 days. Even figured on getting out to the golf course soon.

Sunday I started to feel bad. Monday I was in such pain I called in for new meds. Really dopy at my desk at work. Tuesday, I was out of it. In horrible pain. Wednesday I got back in to see my Spine Doc. Dr Scott Roberts at Christiana Spine center. Excellent guy. I’ve talked several times with him on the phone at this point.

Thursday, Thanksgiving day, I kinda slept in till 11 ish, got up, started to sort some winter / summer clothing. And then found a pair of pants I wanted to wear for dinner at 3 with the neighbors for their Thanksgiving dinner party.

I never got the pants so much as zipped. Somehow leaning over I got a back spazm that put me to my knees. From there I was forced to lie down to alleviate the pain to lie on my back.

Big problem. I was stuck. I couldn’t get up. Beth was home, but in another part of the house running on the treadmill. I bellowed her name for an hour. Images of dying right there flashed in my mind. I’d had an aunt that once fell in her bathroom on a Friday and through a bunch of miss communications, wasn’t discovered until Sunday. I emphasized with her plight and pain. I thought about soldiers that were hit in the field with no one around. Especially remembering the opening scene to Saving Private Ryan where soldiers were powerless and just drowning in the surf.  I was thinking all along if I’d choked or …  I don’t know, anything, I could have easily died. I was powerless to move. George frequently came over and  perched over my hand to have his chest scratched. The cat figured, I was down, go stand on my chest. These guys gave comic relief and I really needed it.

About an hour or so passed (MythBuster marathon on tv, I did watch 2 episodes while on the floor. Thank God it wasn’t something really dumb.)

I could not roll left or right. However, I managed to shimmy 180 degrees to have my head under the bedside table. THANKFULLY I could reach my cell phone where I could call the house phone and get Beth. (If only the house phone was on the bedside table, I as ready to call 911. I can only image the Beth’s face as the fire crew came in through the garage door. It’d been a hell oh a greeting.

Anyhow, I got Beth on the house phone. She came flying up the stairs. I was in tears at that point. (Yeah, not so manly, but I will point out that at no point did I scream or cry like a little girl!) About an hour later, she got my cross-the-street-neighbor to come over with several burly type guys (Thanks again John) and they lifted me up flat so I could get onto the bed.

I finally got my doc on the phone, and we went over options. The best being get my ass down to the hospital ASAP. (I guess 911 several hours earlier would have been appropriate.) With a board under my back I managed to swivel in agony onto my feet with crutches and make my way down the stairs. I was face full of sweat and wiped out when the guys from across the street came back over and helped me into Beth’s car and we were off to the hospital. I should make a comment about her hitting the first speed bump at 50 miles an hour… but  won’t. She was trying to haul butt to the hospital.

Christina Care Hospital on Thanksgiving night was not that bad. They don’t have the Z team working. They were busy, but not horrible. They greeted us at the car with a gurney and a burly security guy helped me in to it. Going in by gurney beats walking in. You’ve already got your bed and passed the entrance exam.

After 2 shots of Dilaudid and a shot of Valium later, gave it about an hour and I was feeling drunk as I’ve ever been and slightly painless. I think the valium was the big kicker. I’d had leg cramps where you could see goose egg size charley horses craw across my calf muscles. My biggest fear in this ordeal was the cramping of muscles would damage something permanently.

Day after: My Doc had requested a MRI asap. The Doc at the hospital was “you don’t want that here, I’ll give you a script for it and you can get it else where tomorrow.” I’ve got 2 words for him. (“Thanks Asshole!”)

I found out this morning that an MRI needs pre-approval with my insurance. Blue Cross Blue Shield is closed today. So is my Doc’s office. I could have gotten it no insurance questions last night at the hospital as part of my emergency room visit.

Thank God my wife has connections. My sister in law happens to be good friends with a Doctor that owns an MRI outfit. She made a call, I made a call, and within a hour and a half, I was in.

I got a copy of the files on the way out. (You can see a shot on the post top above.)

I just got a call from the Radiologist. I’ve gone from a bulging disk to a blown disk. That’s going to involve surgery for sure. 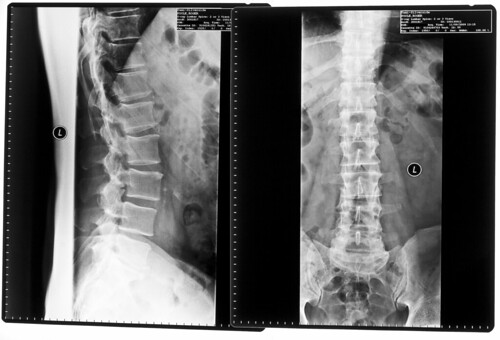 Wednesday I’m going in for an epidural (2 epidurals actually) to help heal a bulging disk between L4 and L5. 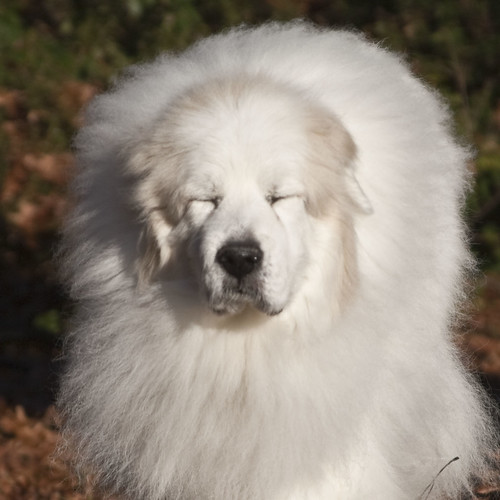 Some sort of headline about never telling a lady’s age should go here., originally uploaded by POOLEworks | roger.

Which I know she wouldn’t want you to know!

Embarrassed pup! She’s 12 today! I really never thought we’d get this far with such a wonderful dog.

Found out her dad lived to 13 years and 5 months.

I’ve had enough requests to place small content management systems on new client sites. Some that will never get used. I frequently suggest WordPress but I’ll will the first to admit, designing for WordPress is a bit of a nightmare because of all of the levels of code. These sites don’t just load up in Dreamweaver the way you’d think they might.

Just got a new book (Ok, it’s a pdf book) but it has an excellent overview of the wp system.

Right now, the site is set at the default theme. I plan to take the entire site over to WordPress, including the front page and assorted other pages.