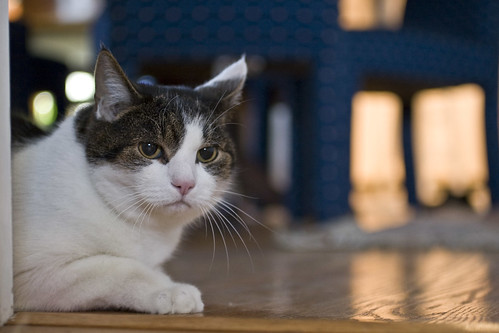 Bob’s not doing well. Started a week ago, or we noticed it a week ago.

Last Saturday, both Beth and I noticed he was breathing heavy. I thought it was odd but I don’t really study how hard my cats breath. Oh yeah, there are times I come in the house and grace doesn’t move and I stare at her for what seems to be an eternity to make sure she hasn’t conked out in the middle of a bad dream. And before you think that’s bad… I did the same thing with mom in her last years.

But this is Bob. 11, almost 12 years old. Lives in the garage because he can’t be trusted in the house. Bob was named after my dad. (My old vet use to label meds with the cat’s name and the owner’s last name. Bob Poole. Dad, I have your ringworm medicine. Dad wasn’t amused.)

Anyhow, this Monday I took Bob to the vet. Wait, before that, his breathing was LABORED by Sunday night. His voice was a cross between a peep and a squeek. I was starting to worry he’d eaten something that had gotten stuck in his throat.

Well, we’re at the Vet. Nice woman, not the same one that worked on Mikey. Rules out a multitude of things. It’s either heart failure or a tumor. She wants to x-ray him but won’t do it to him in this condition. I’d always given the stethoscope a bit of skepticism, but my vet put her stethoscope to his chest and said “I can hear fluids. It’s hard to hear his heart on the right side. We need to drain his chest.”

Done off a IV, 12 ccs at a time She drew a pink goop out of the needle stuck through his rib cage. And as we watched a cat go from pink blue to pink and from very quiet to curious and friendly. Some 250 cc’s later (coffee cup full) he was animated and breathing normally.

Today, Thursday was our return trip. test results are back, pink goo is from a lymph node. Apparently one is leaking or has burst due to injury or tumor. He’s breathing hard again. Not as bad but definately heavy. Back to the chest tube. I’m thinking I can’t do $400 again, if it’s going to lead to a pink shot.

This time it was dark pink goo and only 180cc. I’m not sure I should be happy about the “only” 180 and worried about the blood in the goo.

While doing this, the vet assistent tells us she had to do this to her cat once.

This appointment was $77. New meds. Prednaozone for cats.

We go back Monday… maybe another chest drainage. In all, I’m giving it another week, it’s not the money. I really hate seeing him labor to breath. He seems to appreciate the trips to the vet. He appreciates the attention when we give him pills. He’s such a nice cat.

I don’t know where this is going.