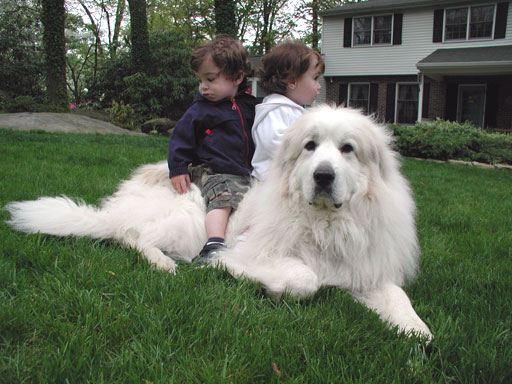 Only 2 seconds later Grace said what the heck are these kids doing and rolled over. Kids went flying.

I almost always convert the image to LAB color and unsharp the luminosity channel. This sharpens only the grayscale component of the image, not the color. This helps prevent unwanted halos from oversharpening. Then convert CMYK or RGB.

Please, sweat the small stuff ~ Authentic Boredom
The Unsharpen Mask is great. However, try this method. After you have resized, levels and etc., duplicate your layer. In the top most layer, change its mode to Overlay. Now go to Filters > Other > Highpass. The sharpening effects as result of a highpass (in overlay mode) is much crisper (and more flexable) than the unsharpen mask. These is the procedures that third-party filters often use behind the scenes.

The New York Times > Opinion > Editorial: Are We Stingy? Yes
resident Bush finally roused himself yesterday from his vacation in Crawford, Tex., to telephone his sympathy to the leaders of India, Sri Lanka, Thailand and Indonesia, and to speak publicly about the devastation of Sunday’s tsunamis in Asia. He also hurried to put as much distance as possible between himself and America’s initial measly aid offer of $15 million, and he took issue with an earlier statement by the United Nations’ emergency relief coordinator, Jan Egeland, who had called the overall aid efforts by rich Western nations “stingy.” “The person who made that statement was very misguided and ill informed,” the president said.

We beg to differ. Mr. Egeland was right on target. We hope Secretary of State Colin Powell was privately embarrassed when, two days into a catastrophic disaster that hit 12 of the world’s poorer countries and will cost billions of dollars to meliorate, he held a press conference to say that America, the world’s richest nation, would contribute $15 million. That’s less than half of what Republicans plan to spend on the Bush inaugural festivities.