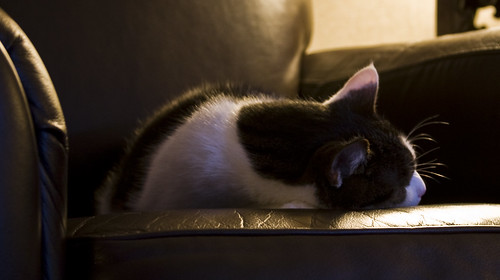 I am sorry to say that Bob didn’t make it through the night.

He had just given up over the weekend. Wouldn’t eat or drink and that made it impossible to give him his meds. I’d like to say it was peaceful, but I don’t really think it was. He was not comfortable Sunday and spend most of the day in my office trying to find a cool spot. On occasion after each move he’d spend some time making some uncomfortable squeaks trying to catch his breath. I just wished I’d had them leave the chest tube in. The poor thing must have been burning up inside. I had an appointment for him at the vet first thing this morning. I was ready to let him go.

When the other kitten died suddenly of renal failure less than 1 year old, I didn’t want Bob to be lonely and I got Mikey. Mikey was a year younger and the two cats started a dominace war that lasted until Mikey died. Leasson learned… you really can’t select your cat’s friends.

Bob was the loser of this entire event. He peed in the house all over the place and ultimately got sentenced to the garage. Where a solidary leaf on the floor would be peed on.

He got his days in the sun to lie outside and watch the birds and squirrels. Anytime the dogs were out, he’d come out to greet us. Stomping up the walkway making little meow squeaks. George would usually get a really uncomfortable head butt, and Grace and Bob would sniff each other. Grace would wag her tail. He wanted to be part of the gang, just not Mikey’s gang. Mikey would look jealously from the house windows.